How to Bag A Bargain

Okay, so you probably think that this article is aimed at buyers, and to a point it is, but it really is the sellers who I would advise to read it, unless of course they want to sell their property for a bargain price!

So let’s take a look at the damage a seller can do to their own bank account when they listen to the wrong advice, or heaven forbid, don’t take any advice (though sometimes this can be safer than taking the wrong advice)!

Firstly one must acknowledge and appreciate that most people (I’m not saying all people, so don’t get huffy) but most people don’t have much imagination especially when it comes to buying a home. So you can’t expect them to walk in to a room and “imagine” what it could look like. You have to show it to them exactly how you want them to see it – and this should be at its best. I mean would you go and apply for an executive position in your tracky daks and thongs? Of course not – it’s not appropriate, and you won’t get the job because your employers won’t see the value in you. So, tip number one for our buyers – check out properties that look drab, boring, or untidy and zoom in on them for your bargain.

So moving on to tip two… let’s apply a basic psychological principal here – that is that “nobody wants what nobody wants”. So if your house has been on the market for a substantial period it will seem as if nobody wants it, so nobody else will want it for this reason. The usual reason that something stays on the market for a long period is that is started off too highly priced. So, eager bargain buyers should look out for these properties that have sat around for ages and have had the price chipped away at and is now really cheap but still being ignored because it’s “old stock” and then swoop in like a hungry buzzard and offer a low price which will probably be accepted due to pure frustration and despair. Overpricing your property is probably the fastest and easiest way to lose money. Then there is selling your property with a tenant – another way to sell at a bargain price. Now, having said that I have just had a couple of “dream tenants” who have had their homes looking better than a stylist could make it look, but that’s rare – very rare so… don’t sell your home with a bunch of students hanging out there because bicycles in the sitting room and mattresses on the floor will cost you a lot – great for bargain buying though!

If you’re a bargain hunter, you need to hope that the Estate Agent for the property you aim to buy can easily be bossed around, so you, as the buyer, get to call the shots. If you’re faced with a tough negotiator it’s going to weaken your bargaining status – so sellers… listen up… choose an Agent who can call the shots – both with you and your buyer – it’ll pay off in the end! Good hunting! 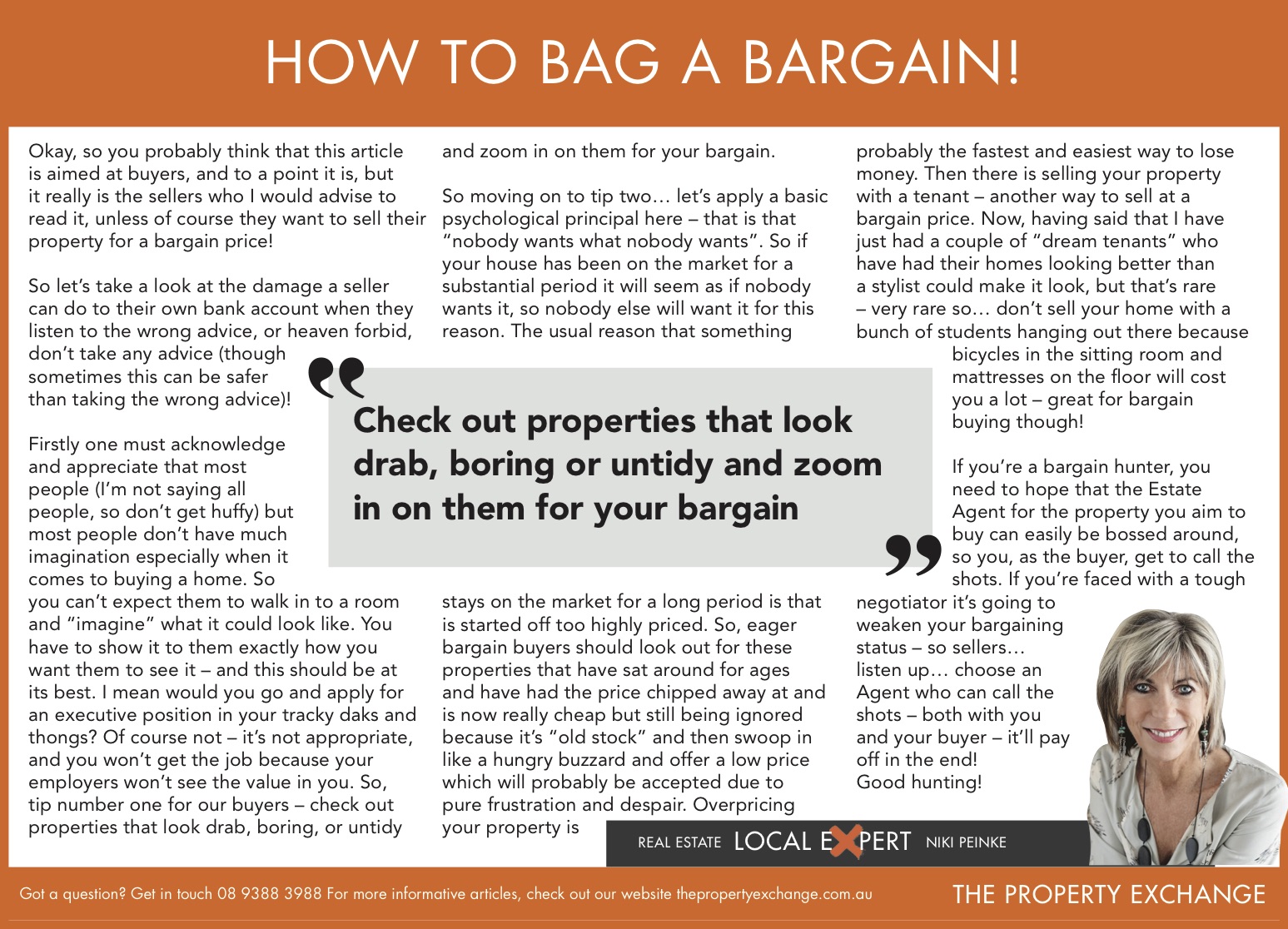