By The Property Exchange
Posted January 21, 2014
In In The News, Selling
Grand Designs & Great Future For Rundown House2014-01-212016-09-07https://thepropertyexchange.com.au/wp-content/uploads/2018/06/website-logo_300px.pngThe Property Exchange - Subiaco Real Estate Agents: Properties for sale or for renthttps://thepropertyexchange.com.au/wp-content/uploads/2018/06/website-logo_300px.png200px200px
0
0

WHEN real estate agent Niki Peinke listed this rundown Subiaco home, she thought it might be snapped up by a developer. But lo and behold, there is more to this story as grand designs and a great future is in stall for this rundown house.

Ms Peinke, who owns The Property Exchange, said she breathed a sigh of relief when the Gloster Street property was bought last week by a couple with grand plans to restore it.

“The neighbours would have been mortified if it had been knocked down,” she said.

The Property Exchange is known for its sharp styling of homes, but in this case Ms Peinke said not much could be done. 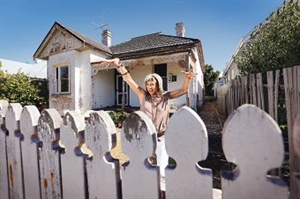 Niki Peinke from The Property Exchange is delighted this empty ‘ghost house’ in Subiaco will be restored to its former glory. Picture: Andrew Ritchie

“The ghost thing was a bit of a joke,” she said.

New owners Zohreh Habibi, a pharmacist, and Nirou Foroughi, a doctor, put in an offer before the first open home.

The empty house has fallen into a state of disrepair, but Ms Habibi was not daunted.

“When I saw it, I fell in love. Our plan is to restore its original beauty and have a very traditional extension,” Ms Habibi said.

The couple, currently living in Mt Claremont, arrived in Australia in 1985 with two small children and two bags of belongings.

The family fled their native Iran because they faced religious oppression and discrimination.

They came with no money and hard-earned medical degrees that were not recognised.

From humble beginnings, the couple has retrained and built a successful pharmacy business.

One of their eldest daughters is an anaesthetist, while the other is a dentist. The youngest daughter is at John XIII College.