Peace and tranquillity in a
close knit, family-friendly community

The area provides a safe and secure community in which many parents choose to raise their children. It also offers generally larger, more affordable blocks than Subiaco next door. With green parkland dominating the suburb, the area is perfect for people with pets. There are also many retirees living in the suburb, who love the beautiful streets and heritage homes of the area.

Daglish is well served by public transport, including the Circleroute, the Daglish railway station, and buses along Hay Street. It sits right in the middle of the City and the coast, providing easy access to both.

The suburb was named after Henry Daglish, who was a mayor of Subiaco and represented the seat of Subiaco in state parliament, including as Premier of Western Australia from 1904 to 1905. As at the 2016 Census, the population of Daglish was 1,419. 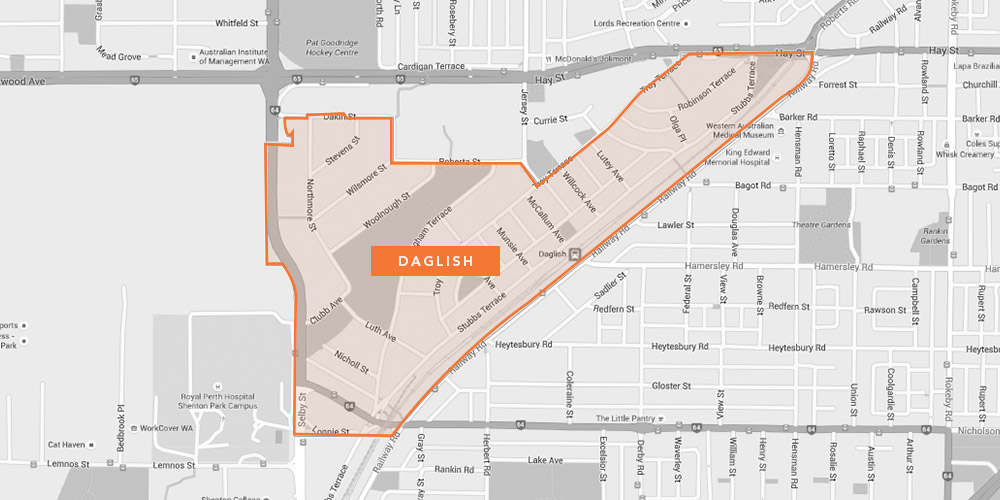 properties sold in Daglish over the past 12 months

property for sale in Daglish today

Daglish is very popular with families, with generous house and block sizes and being close to Shenton College. When the children grow up and move away the parents often stay, making Daglish home to many mature couples and retirees.

There are a number of small blocks of apartments in Daglish which provide a great stepping stone for young singles and couples to enter the inner city property market. Young executives working in West Perth and the CBD also find it a very convenient place to live with the journey to and from work being quick and easy on the train.

Daglish provides a quiet, peaceful sanctuary whilst being conveniently close to all of the action of neighbouring Subiaco and Wembley. These adjoining suburbs contain countless cafes, restaurants and bars, making it easy to keep social catch-ups local. With many boutiques and quality chain stores, they are also great options for shopping for anything from clothes, jewellery, gifts to homewares.

The Subiaco Farmer’s Market, held at Subiaco Primary School every Saturday morning, is a very popular place to shop for fruit, veges, meats and a huge selection of gourmet goodies.

Daglish is a very easy place to keep yourself, your kids and your pets well exercised and full of fresh air, with Cliff Sadlier Reserve only steps away from any part of the suburb. This central hub has created a lovely community vibe, where neighbours catch up with each other each morning or evening.

Not So Great For

It would not be a good choice for anyone who likes to walk straight out of their front door in to all of the action.

The first part of Daglish which runs between Stubbs and Troy Terraces was built around the 1920’s and features properties of a Federation style with high ceilings, ornate decoration and wooden floorboards. Council building regulations have maintained the historic integrity of the housing of the old parts of Daglish. The suburb expanded north in the 1970’s and 1980’s where we see more retro style open plan homes with functional floorplans. The small apartment complexes which line the park along Cunningham Terrace were also built around this time and provide a great opportunity for first home buyers to enter the established metropolitan market.

The properties in Daglish are about 60% owner occupied, with the remainder being high calibre tenants attracted to the peacefulness and convenience of the suburb.

You’ll Fall In Love With

Cliff Sadlier Reserve, alive with locals all out for some fresh air and exercise with their four-legged friends, and the convenience of being able to travel in all directions with ease.