The Times They Are A’Changing

So there I was, having a quiet little session with my guitar, and re-visiting this old Bob Dylan song, and noting the words whilst thinking to myself…..” Well ain’t this the truth right now?”

Ok so back then, this song was more about war, anger, youth and probably drugs, but it was definitely promoting a “changing of the guard” in challenging the conservative and conventional expectations of the acceptable view of life at that time, and how it should be lived.

This had been an era of Mum and Dad bringing up the children in a pleasant suburban home, with the focus being on getting a proper education and then applying for a nice steady job.

However, in the 60’s that all changed dramatically, with youth rising up against convention, and the introduction of hippies, free love Orange People and a life lived in a blurry haze of creativity, music, assertiveness and most of all…freedom.

Nobody was quite sure where it was leading, but everyone was having a great time. Now, however, another change is taking place, also pretty dramatic, and having very little to do with freedom and self-expression. It’s a very different world now and many agendas have changed.

These days, it appears that the movement is going in the opposite direction, whereby we are encouraged not to be self-expressed, we should not be free and we should fall in line and follow instructions from those who supposedly ‘know better’ or are ‘experts’ on certain subjects. We can no longer say what we really think, because ‘rules’ have been put in place and what you say may not be ‘appropriate’ or ‘acceptable’….I’m sure we would all like to know who’s behind all these new rules and laws, but I guess we’ll never know that.

Personally, I would be a lot more comfortable with people saying what they really think…that way you know what you’re dealing with at least. So why are all these things that we fought so hard for in the 60’s now being reversed? Why is our freedom and creativity being quashed? Why are there so many rules, commands and new laws demanding that we fall into line or be punished? It appears to me that all our governments and leaders are marching to some invisible drumbeat that they have been ordered to march to, and have now become the Drum Majors for all of us. Well, I’m not sure that I want to be in this band, but the question is…..will I have the choice ?

Being a 60’s girl, I loved the life we had then. It was free, it was safe, it was fun and there was no fear, and unless you really stepped out of line you never got into trouble. Now, however, you have to watch what you say, watch what you do, be very careful about expressing an opinion, and it seems to me, rather than all being brought together in unity and harmony, the ‘powers that be‘ are pitting us all against each other, and using health as their weapon.

Personally, I’m not a fighter, but I also don’t like being disciplined by people I don’t even know, and I believe that many people right now are feeling the same and are perplexed and confused by this dichotomy that they are facing right now.

So…I hope that throughout all these times that are rapidly ’changing’ that we at least fight to maintain our individuality, our freedom, our imagination, our courage to question what doesn’t seem right, and not allow ourselves to be driven by ‘The Good Shepherd‘ into our sheep pens, to face a very different fate…..

It’s your life, and it should be your choice how to live it. 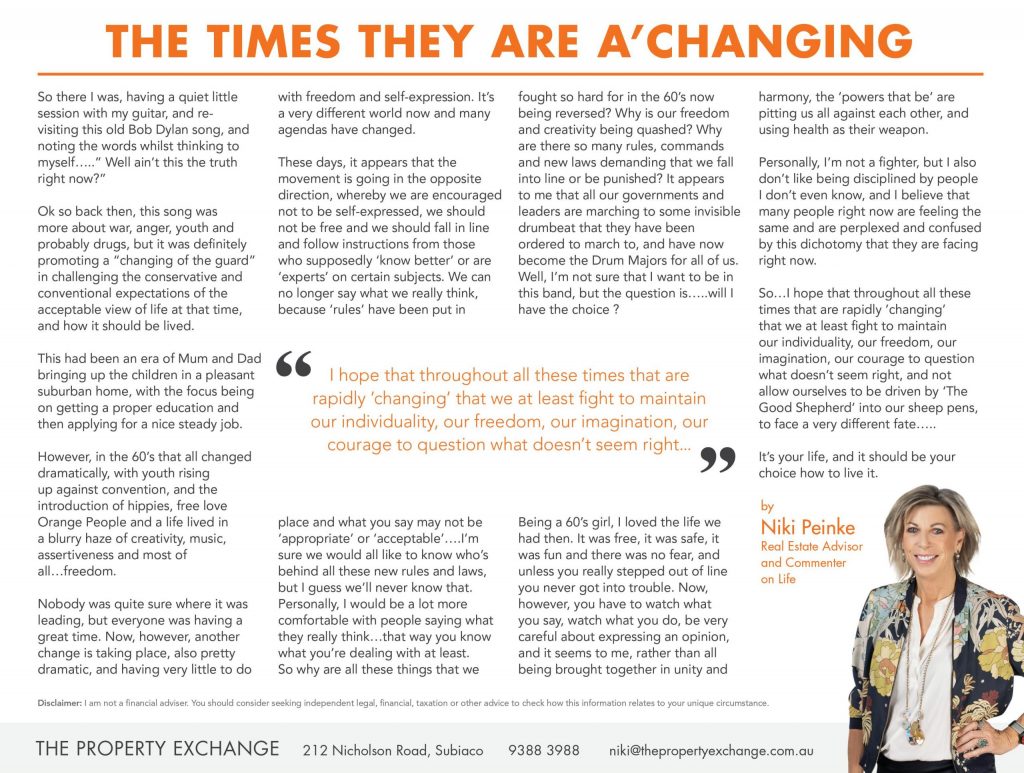