WIIFM – The “What’s In It For Me?” mentality appears to be flourishing well especially in the Subiaco community. In the run up to any election, it is always obvious with the multitudes running around asking others who they should vote for and which party is going to give them the best deal. Why are they all so shortsighted? Why is it that people cannot see that what looks good for them in the short term, can cost a great deal of pain in the long term?

I think the answer here is that nobody really explains it to them – in plain English. What is this strange language that politicians learn in Parliament School that nobody else can understand? What do most people know about “Fiscal policy”? “Appropriation bills” and “Cabinet solidarity”? Why are our candidates rushing around the country side, spending taxpayers money, shaking hands, patting heads and trying to be “Mr Popular” to people they don’t really give a hoot about?

Why can’t they just explain, on National television, what they are specifically going to do and why they need to prioritize some things over others, to get the books to balance and create a solid economy which is good for everybody? Perhaps then we would get people thinking more deeply about who they’re voting for and why, rather than just trying to find out what the quick x for them is going to be in their current situation.

But it’s not just in politics, it’s everywhere. Everybody wants their way, and everyone has a different way, so “Design by Committee” clearly cannot work. We need people with vision, and we need to give them the freedom to make decisions that some people will not be happy with. And they have to be gutsy enough to make decisions that are not going to be popular, but are for the greater good.

Take Subiaco for example – it’s nice of the Subiaco council to let people have their say to its vitality for the future but it’s also pretty silly because they WILL have their say and then if the council doesn’t abide by it – there will be more whingeing.

Rather be accepting of ideas but the ultimate decisions have to land fairly and squarely on one person’s shoulders. The key is finding the right people to a) make the decisions and b) be able to carry them out successfully.

So lets all stop thinking about ourselves and start focussing on how it is for other people because “The more you give, the more you receive and the more you take the less you get”.

Here’s a short list of those who could take note of the above – Bike riders who ride two abreast (even though it is legal, which it shouldn’t be) on roads holding up cars. Those who choose to live near an event venue or hotel and then complain about the noise. People who use the express lane in supermarkets with a full trolley. Cars that sit in the right lane stopping the flow of traffic.

I could go on and on as there are a multitude of annoying things that people do, but also we all need to be a lot more tolerant of each other and when things annoy us, just smile and say “C’est La Vie”. 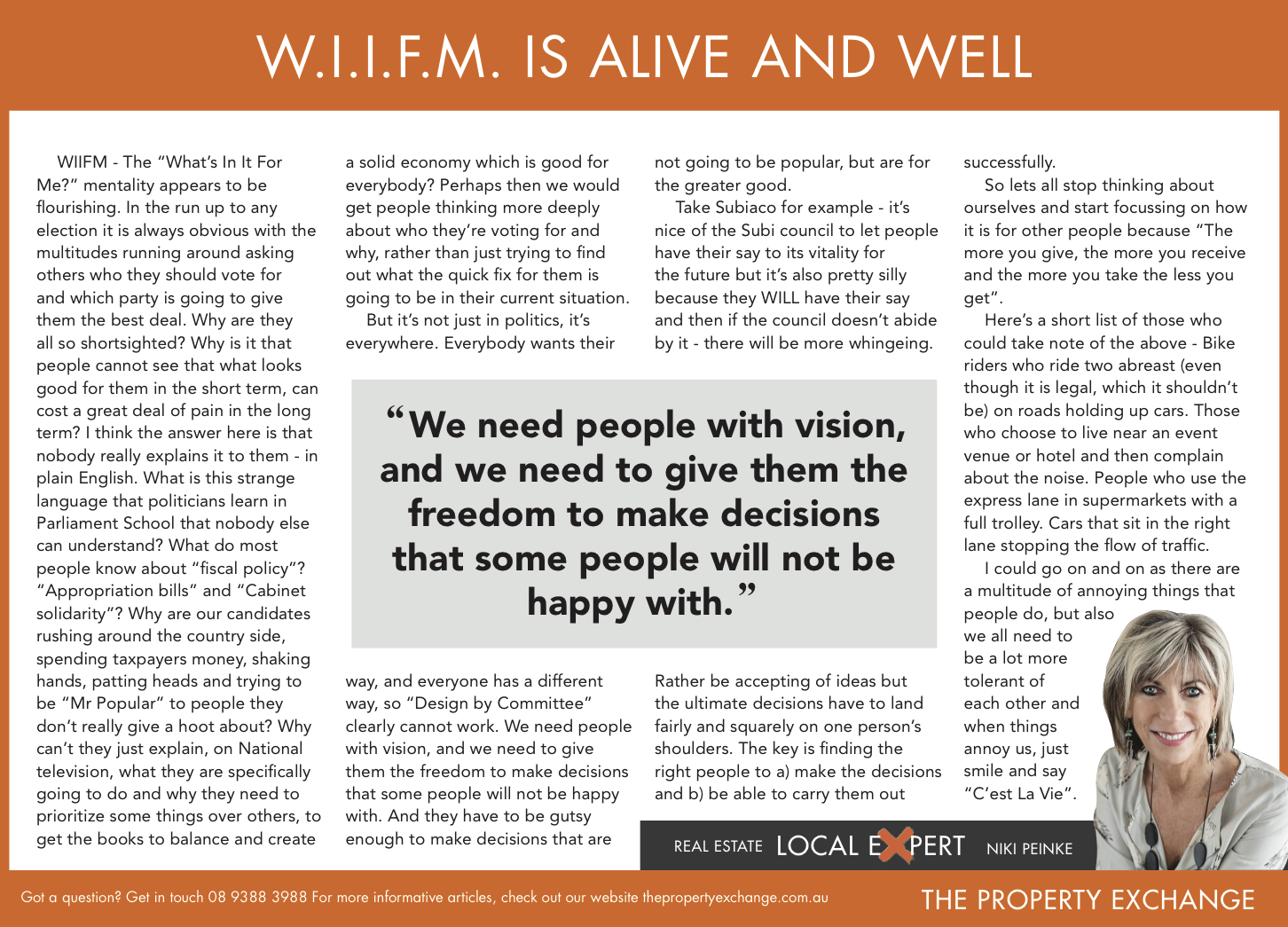