While we are being bombarded by the political “white noise” on television, radio, print and social media, why don’t we just turn off our ears and carry on…

We should know by now that the politicians know very little about running countries and are far more obsessed by winning popularity contests amongst their ‘would be’ voters who are now so confused they’ll probably put in a Donkey Vote anyway and as usual the Donkey will win.

So Bill Shorten is going to stop negative gearing in order to punish the rich people for owning property and to get prices to drop so that the ‘poor’ people can afford them. Right. What he hasn’t got yet is that this will slow down housing, create unemployment and so the ’poor’ people won’t be able to buy them anyway.

When are politicians going to wake up to the fact that unless you support and encourage the people who PROVIDE employment, they are damaging the people who NEED employment. And when are they going to realise that when you provide everything for people who give nothing then the finances of that country are going to downward spiral out of control – just as ours have.

It’s the people who create the foundations of any country that make it strong and Governments need to do everything in their power to support big business, medium business and small business – it’s these people in our community that provide jobs, explore our minerals, grow our food , boost our trade and make our economy robust.

If Governments did not waste so much money they would not have to attack the achievers and charge ridiculous taxes and kill off the people who are trying to build the country, or rob them of the little that they can do to compensate for being royally ripped off in the first place.

And while all the politicians are dishing out all their promises that they can’t afford to keep, to win votes that they’ll probably never get, why don’t they come up with a hard and fast plan, that may be painful for some, but will win the respect of those people if it is explained to them properly as to the reasons why, by someone who has guts, vision and logic on their side.

We should be looking after the people who NEED looking after, not the ones, who are lazy, dishonest and think that this government should pay for them to exist.

So – the moral of the story is don’t let a lot of unwieldy politicians stop you from achieving your own greatness. Don’t panic about negative gearing, don’t worry that the property prices will drop – because if yours does then they all will, don’t borrow more than you can comfortably afford and just try and attain your little piece of paradise that you can call yours, and nobody can take away from you. 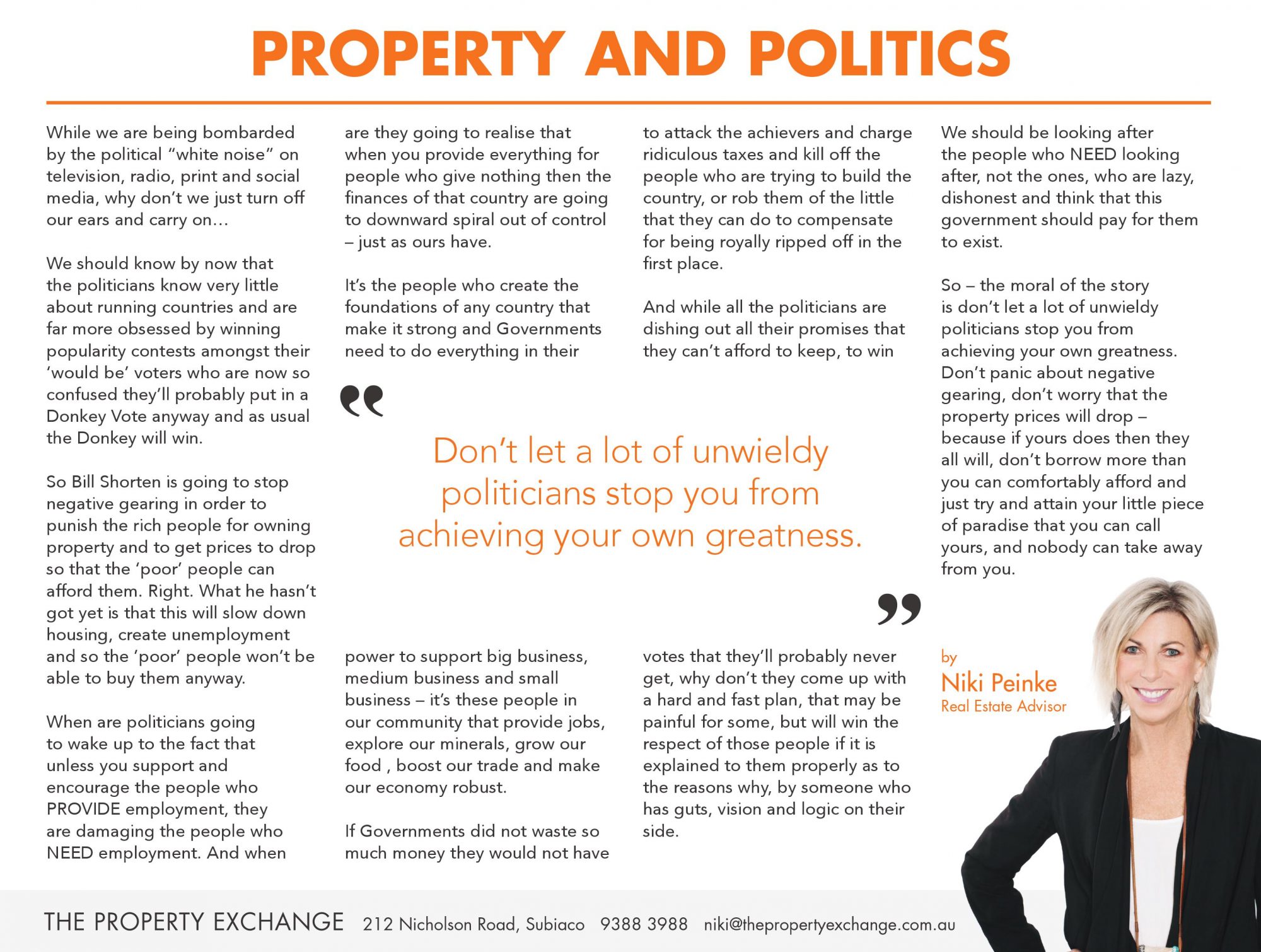