First of all what is that “political correctness” thing? Sounds like an oxymoron to start with, but let’s have a little go at it shall we? What is happening to our society that we are now making up rules, and laws about what we can and can’t say, and how we can and can’t act?

Is this still a free country or what? I don’t think so. We are training people to be reactive, to get offended, to be demanding, to be litigious, and to be angry. All very helpful – NOT!

Remember the good old days, where there were Irish jokes as we all thought Irish people were really quaint but a bit naive? And we made jokes about it? And Irish people laughed? – Mind you they’ll laugh at most things…. oops! Probably can’t say that.

Then we had English jokes (I was born in England by the way) and apparently we never washed, so there were lots of “soap” jokes about us… and we thought they were funny… well not that funny. Then the Scottish, who hated to part with a dollar – well a pound I should say, so we all had a go about them for that? And everyone laughed – including the Scots because it didn’t cost them anything!

Look… let’s face it… we are all different – and we should all be thankful for that before we all become “clones” – yes! Clone jokes! No, forget it. But we are NOT the same. Some of us are tall, some short, some dark skinned, some bright white, some good looking, some not so much, some fat, some thin, some smart, some average, some talented, some not, some Protestant, some Hindu, some… every religion you want, some love cars, some couldn’t care less, some are entrepreneurs, some academic, some sporty, some musical – it goes on and on…

BUT! If we can’t have a joke about anything… and it’s getting that way… where will laughter end up? Will it be banned? Will we have to think before we laugh? Make sure we are laughing at something “appropriate”. Okay… I’m going to tell you a very inappropriate joke and I want you to tell me who’s wrong here, okay?

Many years ago when we were living in South Africa I was in a very smart restaurant with my parents and my mum asked the waiter (who was African) if she could have a coffee, but she wanted a “decaffeinated” coffee because she had trouble sleeping. The waiter started laughing uncontrollable and my mum didn’t know why, and thought maybe he didn’t understand so said, “I would like a coffee, but please make sure it’s “decaffeinated”. At this point the waiter had tears rolling down his eyes, he was laughing so much and he said – “yes madam, I understand, I will get the big boss to make it for you” and walked away in hysterics, whereas mum finally realizing what he had thought she meant was mortified. As it turned out it was the waiter making the joke, and he thought it was hilarious. Now unless you’re from Africa you probably won’t understand that joke, but hopefully you get the point.

So come on guys, let’s lighten up, let’s stop being so reactive, and so offended and so incredibly sensitive… no one is out to beat you up emotionally (well maybe at the footy) but let’s promote laughter, and fun, harmony and see the “funny” side of things, even when it’s directed at us, maybe our taste, or our funny little habits, or our beliefs, or our abilities… because without laughter… we are in serious trouble… in that… life as we know it will be over! 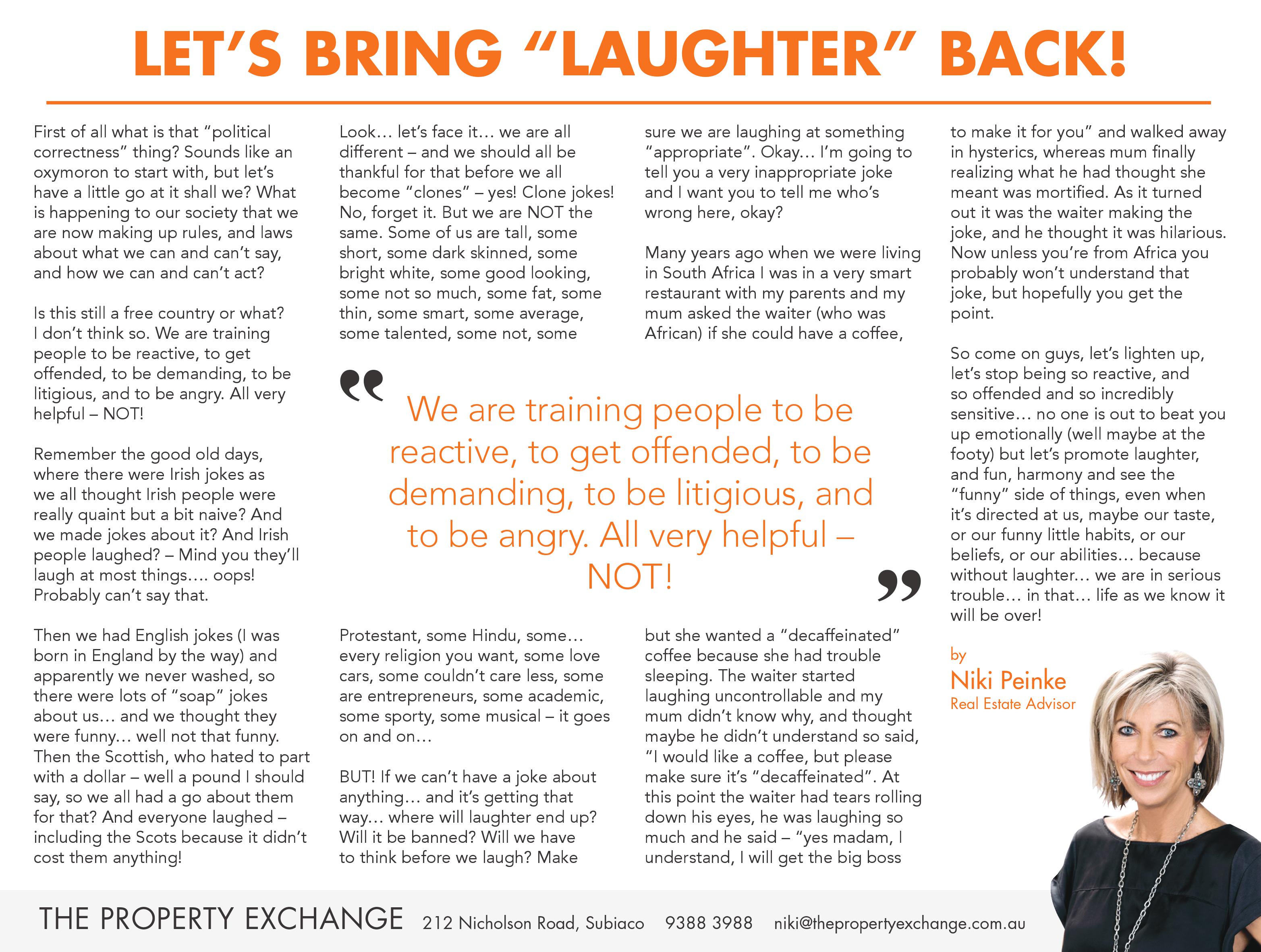