So here we have a proposal to allow 6 storey developments along our beloved Rokeby Road, by the very same person who took away our markets and replaced them with a Coles and Target store.

What insanity, or perhaps greed, would allow a decision to take the one jewel in our battered crown we call Subiaco, and turn it into just another characterless series of tedious apartments, when we are already so oversupplied with them that everyone is dropping them like hotcakes?

So why, with all the new apartments and housing in Subiaco, is the place doing a decent impression of Karrakatta right now, especially at night? I think I can answer that. There’s nothing to DO here! Apart from the new buzzing Vic Hotel, whose owners I really take my hat off to for being proactive and creating a great atmosphere and bringing young people back here, there is really nothing. The restaurants are disappointing in that most of the kitchens are closed by 8.30pm – and you wonder why people don’t come here? In 1986 I owned the Hard Rock Café in Subiaco where Rice Baby is now and I closed the kitchen at 3am. Why? Because people went there to eat until then. Before the theatre, during, after the theatre, after the pubs closed, after they’d had enough of nightclubbing…and I can’t tell you how much fun it was. No drama, no fighting, just laughing and dancing.

So much negativity with this Council, so many bad decisions, so many people trying to have their say and yet nobody being heard. So many hollow arguments, so much procrastination. If you hear nothing else Subiaco Council, hear that people want some village atmosphere left in Subiaco, some character, some individuality and – even if you have to keep allowing units to be built everywhere – please keep your hands off Rokeby Road! Before the “Paris End” becomes the Rokeby Flats End.

Just when things are starting to look up with some groovy little bars and restaurants popping up, a huge shadow is cast over the future of Rokeby Road by the prospect of more units, literally robbing it of sunshine, atmosphere and history – the very thing that everybody used to come to Subiaco for.

You have a massive number of people who have signed a petition not to have 6 storeys along Rokeby Road, just like you had for the return of the markets, so please don’t let it fall on deaf ears again. 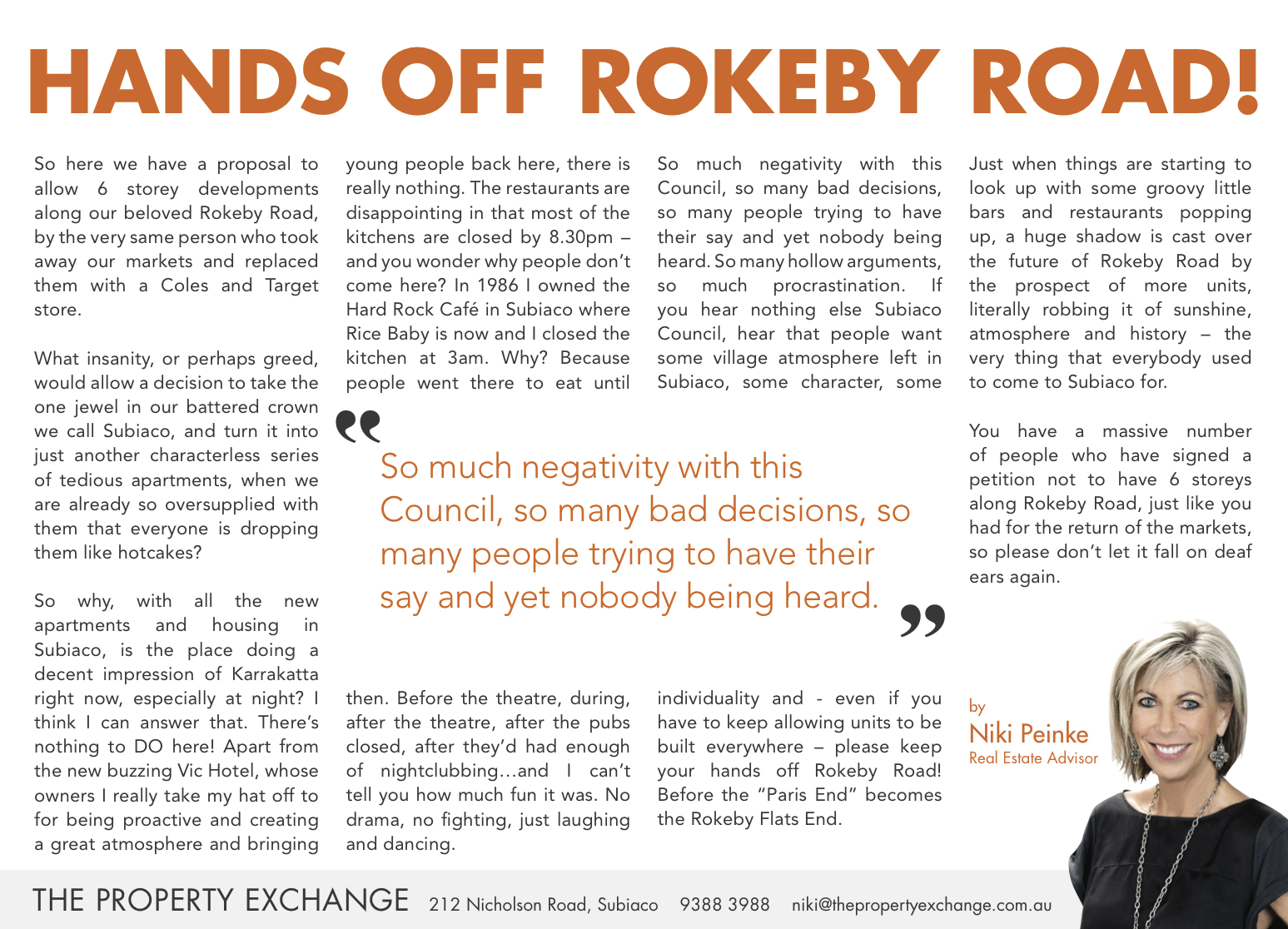 Niki Peinke
In 1988 Niki started her real estate career selling residential properties in Subiaco and surrounds, and was top salesperson in her company for 5 years running. Niki then, in partnership, created The Property Exchange which was established in 1997.
Recommended Posts
Showing 2 comments